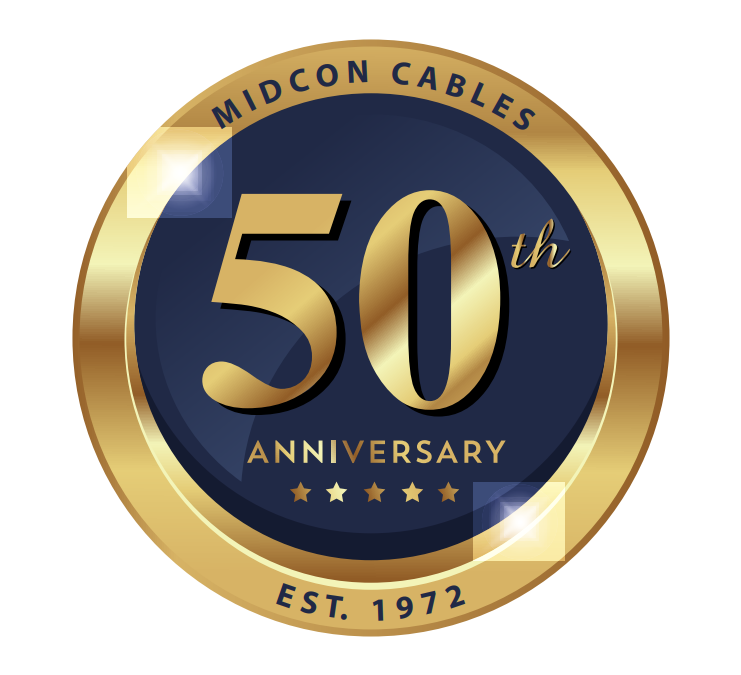 Midcon was started in 1972 when a group of individuals, Tony Bauer, Jim Morris & Pete Peterson decided to leave Fairchild, which later became LaBarge to started Midcon Cables. Other players were Glen Bowman, Everett Johnson, Carol Sill, Lloyd Perry & Lloyd Galhoffer, they were key players, but we are not certain that they had an ownership in the company.

Midcon started out in 3 locations. The buildings that were occupied is 9th & Rangeline, where Harbor Freight is currently located.

The company also occupied a building just West of 7th & Illinois, which was the business office.

The cable manufacturing of the commercial assemblies were located in a building on North Main.

The company continued to grow and eventually the owners thought it would be wise to consolidate all their facilities into 1 location. Midcon purchased the building at 20th & Davis. The manufacturing space had to be enlarged and an addition was added on the East side. Before the tornado this was the location for Midwest Tire Company and is now a parking lot for ABC Supply.

In 1979 the city of Joplin in conjunction with Burlington Northern Railroad erected a shell building for the purpose of creating a rail spur in the Joplin area. At the time there were no takers for the property and Pete Peterson, one of the original owners, convinced the city that a manufacturing facility that would employ 100+ Joplinites was more conducive for the local economy. The parties agreed and the building was purchased. In late 1979 Midcon received 4 quotes for making the necessary alterations to the exterior and interior of the building.

As the company continued to flourish it was necessary to erect an additional facility to handle the growing military & commercial market. In late 1983 Midcon received quotes for the erection of a 40,000 square foot building just South of the main office. Once again, Carol Dale Construction was awarded the contract. All of the commercial business was moved to the South building. At the time, both buildings were independent entities operating under one name. Each building had separate stockrooms, shipping and contracts offices & they were not connected by a breezeway.

In the mid 1980’s the Midcon owners were approached by Criton Industries. Criton Industries wanted to expand their portfolio and wanted to acquire the assets of Midcon Cables. The owners decided that it was a good deal and followed through with the transaction. In the late 1980’s Esterline Technology purchased the assets of Criton Industries. As we move forward the commercial business became more competitive with cable assemblies being manufactured over seas or in Mexico. In the early 1990’s most of the commercial business was gone and the military business was also shrinking. At some point Esterline made a decision to change the management team and in April of 1994 they brought Chuck Wheeler on board to breathe some life into Midcon.

In 1994 Midcon just patented our EverFlex® product & process. EverFlex molded-woven ribbons provide a unique alternative for organizing and managing a variety of different conductor types and sizes into single or multiple flat flex wiring or rectangular cross sections.  EverFlex is a high circuit density ribbon cable that has a low profile molded cable termination and controlled circuit positions for organized wiring in tight and irregularly shaped spaces. For the next five years we worked closely with Esterline with a focus on growing the Defense business with a focus on EverFlex organized wiring solutions.

In February, 2000 there was a major change in the Esterline management team and they decided to move in a different direction. They decided that Midcon did not fit their new strategy and the company was offered for sale. Chuck continuously expressed an interest in acquiring the company with very little success. In November, 2000 Esterline gave Chuck permission to pursue the acquisition of the assets of Midcon. On August 20, 2001, just prior to 9/11, the management team secured the necessary financing to purchase the assets from Esterline. Through the years the team successfully grew the value-added business leveraging our EverFlex technology while providing Customers with outstanding Quality and Delivery performance.  Midcon enjoys preferred supplier status with nearly all prime defense contractors, such as Lockheed Martin, Raytheon, BAE Systems, Boeing.  These customers count on us for our ability to manufacture custom cable assemblies, custom wire harnesses, as well as the traditional cable harnesses, wire assemblies, an cable assemblies.

In 2009 the management team decided to make an election to convert Midcon to a 100% employee-owned company or ESOP. After several months of working on this project it became a reality on May 14, 2010.

In the changing environment the Company saw a need for lower priced wiring assemblies so we could stay competitive. In 2011 we began to explore the possibility to expand our operations in South Carolina. On June 28, 2012 Midcon was able to secure the assets of ESCOD Industries, a low cost cable assembly facility. It was decided that the Joplin facility would continue to focus on wiring solutions and value-added assemblies and the SC operation focusing on growing the build-to-print business.  This new direction ultimately fueled the company’s growth to record levels.